Mitch picked up a summer job delivering food for a local Bar & Grill called Dina’s in his small Virginia home town. You see, his father played poker with the owner and that’s how he got him the job. Drove his own car, a Toyota. Made good tips and could get high if he didn’t have to go too far, which was rare. Rare except for Tuesday.

Late Tuesday night, an order comes in for a single strawberry milkshake for an address all the way out on Wildwood road. 606 Wildwood Road to be exact.

“All the way past the railroad tracks for a fuckin’ milkshake!?” Mitch says as he read the ticket.

“Sorry, man” his manager replies, “feel free to have this be your last delivery then head on home.”

“Thanks, boss. I’ll see you in the morning.”

Mitch makes sure the bag is secure so that the milkshake doesn’t spill. He can’t stop thinking of how stupid he thinks it is someone wants a strawberry milkshake delivered at 11:30 at night on a Tuesday, from a restaurant far enough away for it to most likely melt a good bit before they even got it.

“This dumb motherfucker…” he says to himself in his car.

He speeds up to catch the light that takes him over the railroad tracks that turn into Wildwood road. Wildwood road is a long, windy country road with houses on large acres of land. It is usually a pretty desolate area to drive through, especially at this time of night. He keeps his eyes peeled, because the addresses to these houses are usually stamped with small stickers on each mailbox. He slows his car down and turn his brights on and reads each mailbox he passes.

He stops in the middle of the road then slowly reverses his car to take another look at the mailboxes.

“608…602…what the-…wait” Mitch confusingly says to himself. Mitch notices a small gravel path in between 608 and 602 without a mailbox. He peeks out the passenger side window, and painted in pink on a tree by the path is “606”.

He turns his brights off, and slowly turns onto the path. It is a downward-sloped driveway, probably about 50 yards long. As he starts heading down, he notices there are a few beat up pink cars parked beside each other along the sides, as if it is a broken-down lot. The windows are smashed out of one. The others don’t have hubcaps. By the cars is a tree with no leaves, only hanging dead branches. Past the branches he can finally see the long dimly lit front porch of an old pink house.

As his car approaches the porch, Mitch notices a figure in the upstairs window. It appears to be a man, clearly standing, as if not to hide, and looking down at Mitch.

“Holy shit…” says Mitch to himself, jarred. Mitch gets out of his car and starts waving up to the window, mouthing “Hey buddy…I have your milkshake, from Dina’s!” The man doesn’t react.

Mitch waves again, this time pointing at the bag in his hand, mouthing “STRAW…BERRY…MILK…SHAKE.” The man remains still without any response or reaction.

“What the fuck…” Mitch says to himself. The mouthing turns to yelling as he one more time tries to tell the man “I HAVE YOUR STRAWBERRY MILK-“

The lights go off in the room where the man was standing, along with the porch lights, as if a circuit breaker has gone out. Mitch hears a rustle in the branches and looks to his left quickly but can’t see anything. He frantically reaches for his phone and as he tries to access the flashlight, he accidentally goes to his calculator.

“I don’t know what the hell is going on man but I’m going to leave your milkshake right here and go!!” Mitch calls out. Mitch places the bag onto the driveway as he starts to make his way back to his car.

“I am the Pink Man” says a strange gargley voice right beside Mitch’s face.

Mitch yells and bolts toward his car as fast as he can. He slips on a divot in the driveway and falls face first into the asphalt.

After a light-headed few seconds, Mitch starts to slowly look up. As Mitch lifts his head, he sees a thick pair of pink boots standing in front of him. He continues to peek up and notices the thick pale legs that fill them, followed by a tight pair of white briefs. The man’s stomach is exposed, stuck out like a beer belly, but solid. He is wearing a long blush bathrobe that almost looks like a kimono. The man’s face and head are painted pink, with black circles painted around the eyes, which are wide open and a big smile boasts his disgusting teeth.

The man starts laughing hysterically as he walks over to the bag that Mitch had placed on the ground. He reaches into the bag and rips out the milkshake. He pops open the top and starts sloppily drinking it, letting it spill out of his mouth onto his chest and bath robe, and spits it in the air and onto himself and Mitch. Mitch peeks in confused fear. The man begins to hop up and down, screaming “AHHHHHH HAHAHAHA…HAHAHAHAHAHA….AHHHHHH!! PINK MAN! PINK MAN!” His voice sounds like if the devil had water in its mouth. He continues to do this for about a minute before he finally stops.

Mitch, beyond terrified, is holding the back of his head to guard himself anyway he can.

The man squats down to meet Mitch’s eye level and looks right at him.

“THANKS FOR THE MILKSHAKE” he says then runs away.

Mitch waits a few seconds before looking up. It appears the Pink Man is gone. He gets up carefully before running into his car and speeding up the 50 yd driveway as fast as he can. He looks at the tree, the porch, and the cars quickly as he leaves, and there’s no sign of the pink man. Mitch speeds as fast as he can away from 606 Wildwood Road, approaches the railroad tracks, and a train is passing.

“No no no no….” he says to himself frantically.

He keeps peeking in his rearview mirror, legs shaking. Each way he looks he sees no one. Just a black landscape of road and trees, with your occasional street light. The train is barreling past him in front. He keeps looking in his left and right sideview mirrors, still nothing. He sees the train’s caboose approaching.

Finally the train passes and the traffic levers start to go up. He looks out his rearview and right side view mirror and sees nothing. He lets out a sigh of relief.

Before the lever’s fully up, he looks out his left window.

The Pink Man is running full speed toward his car, holding his hand up as if he’s holding something. Mitch is screaming and tries to speed away, but can’t in time. The Pink man approaches the car, intensely dips his head into the driver’s side window and screams at Mitch, “I FORGOT TO TIP YOU” and tosses two dollars at Mitch before running back into the woods screaming “AHHHH HAHAHA!! PINK MAN! PINK MAN! PINK MAN!!”

The next morning, Mitch gets to work at his normal time. He clocks in and starts unstacking chairs and moving tables to set up. He is not moving as fast as usual today, as he didn’t get a lot of sleep the night before. He is doing alright, though. His manager comes out from behind the bar to greet Mitch like always.

“Top o’ the morning to ya Mitch” he says as he tips an imaginary hat. This was an inside joke the two of them had.

Mitch doesn’t go along with it like he usually does.

Mitch is shaking his head, looking traumatized. His manager makes a confused face and can tell something is wrong.

“Everything ok?” he asks.

Mitch shakes his head a bit more. Lets out a chuckle. Finally collects himself and says, “Yeah man. It’s just… the dude only tipped me two bucks.” 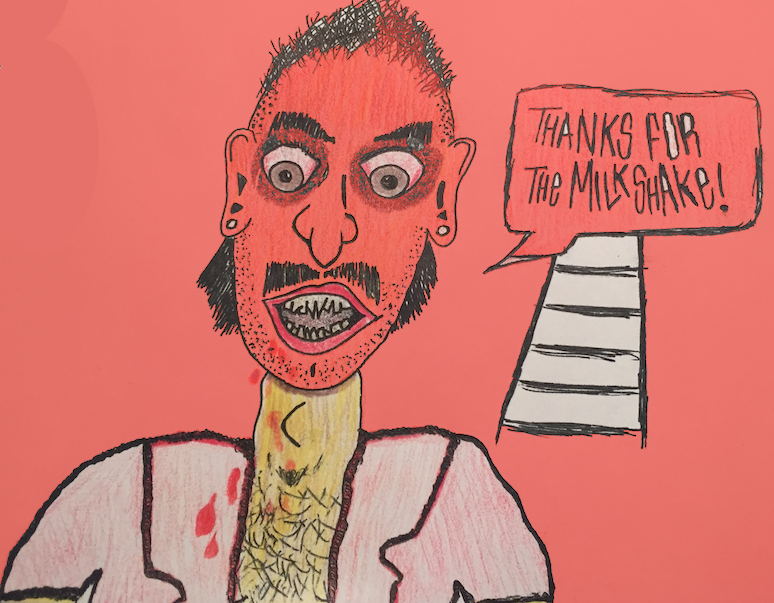